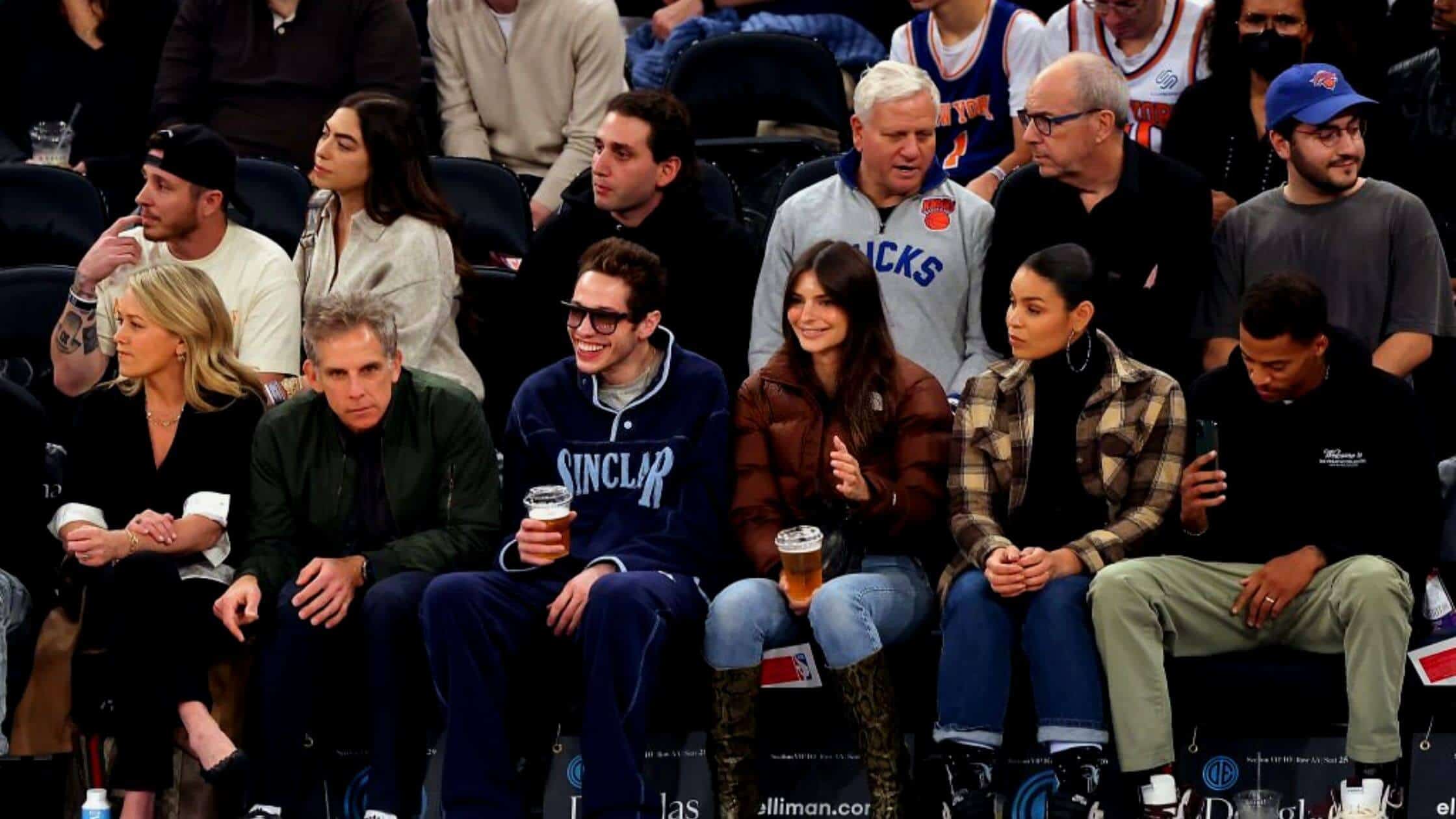 On Sunday night, the former SNL star made his first-ever public appearance together with his rumored girlfriend, Emily Ratajkowski at the Knicks game. The comedian and the model sat side by side and were the major spotlight of the event.

Other than the new couple, the game was even enjoyed by actor-comedian Ben Stiller, his wife Christine Taylor, and also singer Jordin Sparks.

After nine months of dating, the “Kardashians” star and the “Saturday Night Live” alum officially ended their relationship earlier this summer.

Just three months after, the SNL comedian and actor, Pete Davidson was rumored to be in a relationship with the American model and actress, Emily O’Hara Ratajkowski as they were spotted together by the media.

Meanwhile, Em Rata has also ended her four years of married life with her estranged husband, Sebastian Bear-McClard. As per the sources, it is claimed that she broke off the marriage due to the allegations that he cheated on her. The model and the “Uncut Gems” producer share a baby boy.

The rumored couple was enjoying the Knicks-Grizzlies game together at Madison Square Garden. Photos of the couple are spreading all over the media and were even shared by the basketball team on Instagram and Twitter. From the photographs, the duo seemed to enjoy their time together with big smiles and some beer.

The comedian, 29, and Em Rata, 31, haven’t yet confirmed their relationship in the public but this exclusive public appearance has paved the way for more ignited gossip in the Hollywood entertainment media.

According to the sources, there are chances for a potential relationship as the duo really like each other’s company. An insider opened up to the media that the model and the comedian have been talking for a couple of months now and they are at an early stage and it seems they like each other.

Earlier this summer, both of them broke up their relationships and met each other through their mutual friends. As per them, both Pete and Em had some sparks and he always made her laugh and even loved her intelligence which seemed to have impressed him.

Amid Em’s divorce from her ex-husband, Sebastian Bear-McClard, she enjoyed dating which she even disclosed in the media. In an interview, she disclosed that she had never been single for a long time and just like others she too has all emotions.

Every day seemed different and it feels nice to have all these combinations of emotions, which she believes is what keeps her alive.

After the divorce, she said that it was difficult for her to go on dates and was really terrified of the thought of whether or not she liked them or not. She was so confused about whether what she does is right or wrong.

She is always suspicious about the one with her and what they really need from her. And at times, she could even doubt herself and even her worth. But as of now, she is not much bothered about all that stuff; she only enjoys the company and is not much concerned about any other things.

The couple’s photos were spreading all over the media and comments were overflowing under Knicks’ Instagram posts. Fans and entertainment media are hopefully waiting for some good news in the future.

Read More: The Legendary Singer Visits New York With His Children In One Of His Rare, Epic Visits!

Before the first public appearance at the game, the duo was spotted holding hands on a date in Brooklyn earlier this month. And earlier this week, it is found that the new couple attended a Friendsgiving together and even were spotted before enjoying their own time together doing their favorite activities.

Before Em Rata, Davidson has a long list of sparkled dating history and numerous A-lister exes which includes  Kate Beckinsale, Kim Kardashian, etc. previously, he was engaged to Ariana Grande.