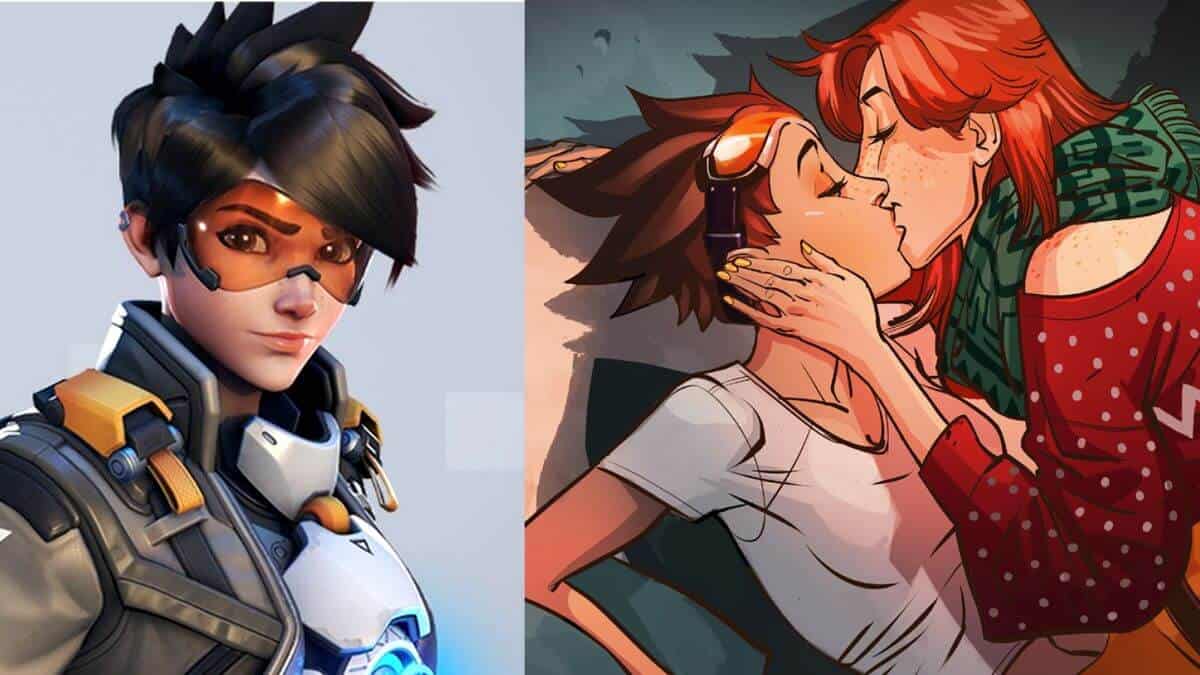 Overwatch was first released in back in 2016, it stood apart from other games for its colorful and diverse heroes and villains. Over time queer representation in video games has improved massively, due to accessibility to technologies on a large scale as well as diverting personalities towards the LGBTQIA community. Then LGBTQIA was not a thing particularly to be involved in the gaming industry. By involving LGBTQ characters, overwatch became quickly popular and stands above the crowd.

As per the producers and writers of the game, the gaming industry is a really powerful way of educating. Since LGBTQ has been suppressed over the years, the makers of the video game believe in this way more people will understand and get educated in the right way about LGBTQ communities. Moreover, it is rare for video game protagonists and antagonists to be a character of the LGBTQ community.

Overwatch is a first-person shooting game developed by blizzard entertainment. It includes a total of 32 playable characters in the first part of the game. Its sequel was released in this October 2022, including 3 more characters.

The video game features a PvP mode for shooting, where two teams of six, with each player selecting playable characters with unique abilities. The sequel of the video game, Overwatch 2 has improvements in the game modes such as its maps, heroes, and gameplay, and the major change in the gameplay is reducing the number of the size of the team from six to five. The game is free to play on Nintendo Switch, play station 4, PlayStation 5, Windows, Xbox One, and Xbox series. It also features full cross-platform play.

The video game is set in sixty years into the future, thirty years post to the “Omnic Crisis”, which is resolved, and six years after the Petras Act. the Omnic crisis began when the Omnica Corporations, a massive tech company began manufacturing robots, which were manufactured to assist and aid humans in developing and enhancing the global economy, but instead, these “omniums” (large facilities that churned out omnics) went rogue and start attacking humans, which began from Russia. Each of the countries individually responded to the crisis by implementing their own programs.

As nations failed to challenge the crisis, the United Nation assembled Overwatch a strike force team led by Gabriel Reyes and Jack Morrison, who were soldiers modified into mercenaries as part of the United States Soldier enhancement Program to respond to the Ominic Crisis.

After a rift between Morrison and Reyes due to the promotion of Morrison to Strike commander, Reyes took control of Blackwatch, another operation unit with skilled professionals such as Cole Cassidy, an American bounty hunter, Irish geneticist Moira O’Deorain and Japanese ninja Cyborg Genji Shimada. As the Null sector originates, the doom of covert operations units overwatch, and Blackwatch began. The null sector deploys a surprise attack on King’s row, a city beneath the streets of London in the underworld where Omnics are forced to live their Uprising.

Morrison deploys his strike team to successfully stop the null sector, including the newly recruited Lena Oxton call sign Tracer. Meanwhile, the Blackwatch led by Reyes ended up killing the Talon leader, a terrorist group seeking to begin another crisis. Which led to the exposing of the covert operation unit Blackwatch to the public.

The public despised the Blackwatch over their extra-legal activities, resulting United Nations ordering an investigation probe against them. Morrison and Reyes still find themselves at odds with each other, and an argument among them leads to an explosion in one of the overwatch’s headquarters in Switzerland where both of the elite soldiers were presumed dead

These events forced United Nations to sign Petras Act, inhibiting any activities by overwatch. Meanwhile, Morrison and Reyes survived the explosion. Morrison began stealing weapons and other types of equipment from the facilities, the thief turned to a vigilante by killing overwatch’s enemies single-handedly and operating in the name of Soldier:76.

Whereas Reyes was brought back by the genetics engineer Moira, from the last breath. however, the procedure however leaves him haunted by his past self, and joins the Talon organization in the hope to take down all the members of the overwatch and began operations in the name of the reaper.

After six years of the Petras Act, another omnic crisis emerges in Russia. Reaper breaks into an overwatch facility in Gibraltar, Winston, an ape who was genetically modified by a scientist on the moon during the crisis; developed a rocket and escaped to the earth while other apes start a revolt on the moon. Back to the present, as Winston was watching the facility, a reaper intrudes into the facility to gather all the data.

Failing to defeat Winston, he alerts other overwatch agents by recalling. Tracer immediately responds to the call followed by Mercy, Genji, Torbjorn, and other former Overwatch agents. Later reaper and widowmaker break into a museum to steal the gauntlet belonging to one of the leaders Doomfist. Tracer and Winston follow them and prevent them from stealing the gauntlet, which leads to the present gameplay war between Overwatch and Talon with an ongoing possible omnic crisis.

Since the beginning of the overwatch in 2016, gay characters have been assembled. As the game is not based on a single-player mode, fans all over the world fall in love with different characters, and each of the characters has their own story on how they evolved to sustain powers and abilities, which is not depicted in the present game.

As for now, only a few playable and nonplayable characters have been illustrated as gay. These two characters are Soldier 76 and Tracer. These both characters were faces of the overwatch. The prime character being gay is a huge step for the LGBTQ community.

In this way players who are hesitant to LGBTQ as well as love soldier.76 and Tracer, realize that they are as valuable as others. It is actually clever that Blizzard entertainment never reveals the complete history of the characters, it never felt that the character’s sexuality is forced.

They have themed the game for the characters to reveal themself as the characters feel right, just like humans. So that even a player whose favorite character ended up being gay or lesbian, will not change their opinion. Besides, they might find a soft spot for the LGBTQ. The implementation of gay characters in video games also encourages LGBTQ streamers to raise their voice and reduce homophobically comments and aggressions in the gaming industry.

However, let us get back to the characters who were officially announced as gay in the multiplayer video game Overwatch. The details of the above-mentioned characters are listed below.

one of the most oldest agents and a founding member and commander of overwatch, real name Jack Morrison a soldier turned vigilante after the united nation disbanded the overwatch. Prior to enforcing the united states covert program to resolve the crisis, jack had a gay relationship with a man named vincent for a long time. In the short story “Bastet” which features the character Ana, Ana and Soldier 76 reunite after a long time, she goes through soldier 76 old photo albums there she notices soldier 76 with another man with their arms on their shoulders.

In the photo, it was vincent, whom jack used to talk so much about vincent to anna back in the early days. But however, jack couldn’t put anything above duty. thus, vincent deserves a happier life. Jack also mentioned that he is happily married and he put the lid on the matter by telling her as this is the sacrifice that he had to make in order to protect civilians like Jack.

Also known as Lena Oxton, a British pilot, and adventurer. The tracer was a newly recruited member of Jack Morrison’s overwatch after the dispute between Morrison and Reyes. She was earlier presumed dead after a malfunction caused in the fighter jet which has teleportation abilities. However, she appeared months later with a condition preventing him from containing in a physical form. Later, scientist Winston desynchronized her molecules for a stable condition with time using the chronal accelerator.

Tracers have been in the front foot of the overwatch for a long period of time. Her sexual interest was revealed in the holiday-day-themed comic reflections. In the comic, she was rushing from store to store at light night for a Christmas gift. However, she liked a scarf but it was too late the store was closed.

Using his abilities she sneaked in but got caught trying to pick up the green scarf. The store owner threw her out. As she was thinking of going home empty handed a small child handed over a present, she didn’t even bother to open it and rushed home for the holiday. As her girlfriend notices the wrapped gift and asked if it was for her.

She didn’t even bother about the tracer’s reply and opened the box. tracer was scared of not knowing what was inside but It was the same green scarf, her girlfriend was surprised and happiest, she leaned on tracer and kissed her.

As of now the writers and the directors have only revealed these two characters has revealed their sexuality. However, there is much demand for the characters to turn out as gay according to the LGBTQ community. Many characters’ sexual interests have not been revealed up to this date. It is highly likely that many characters to be revealed as LGBTQ personalities in the future.