LGBT groups in Venezuela are calling the murder of a lesbian a possible hate crime.

Petra Maria Rojas died in a public hospital in Porlamar, the largest city on Isla Margarita, Nueva Esparta State in Venezuela after being stabbed.

She was attacked after she and her partner, Yuli Betancourt, were stopped as they walked hand in hand along a street by a man, Pablo Montoya, who had approached them asking for a cigarette. After they refused, he verbally abused the couple. Betancourt then took up a glass bottle to defend himself.

After thinking that the man was scared and had fled the scene she tossed the bottle onto the road. But he ran to a nearby restaurant where he worked to steal a knife and attacked them again. Rojas saw the man coming after them and yelled to her partner to run. Montoya caught up with Betancourt and threw her to the floor to try and stab her, but she escaped and ran to a nearby police ‘tent’. Betancourt says she found no police in the ‘tent’ and immediately returned only to find her partner injured.

Rojas had also tried to run, but Montoya came up and stabbed him in the right side causing internal bleeding. Betancourt took her by taxi to a nearby hospital but she died of her injuries a few hours later.

Activists are calling for a full police investigation, including of the possible hate motive.

In January two young gay men were found shot and beheaded in a Caracas barrio.
The two were reported to be effeminate. One was shot several times, then his throat was cut and he was thrown into a pit. The second was shot whilst trying to flee, also had his throat cut and was then set on fire whilst still alive.
In April Johan Leon, director general of Zulia for Life Action, said they had received three serious complaints about physical and verbal abuse by local police.
“We’re not just talking typical offensive words officials use when referring to homosexuals, but of beatings,” said Leon, referring to the Brigade Chiquinquirá Regional Police Zulia State.
He said that in a local cruising area, police look for someone with a ‘mannerism’ and then try to extort money from them. But the ombudsman’s office has “opened the doors and has placed the order for processing such complaints,” said Leon, however LGBT people are afraid to make a report for fear of reprisals, to avoid public ridicule and because they don’t believe officials will take any action against police.

“We have to denounce, without fear, because you need to set precedents for progress on this theme also recalled that exists in the Ombudsman’s a mechanism to remain anonymous if they are the victim’s wishes,” said Leon. 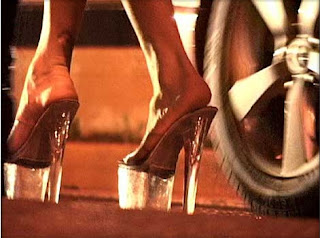 In Argelia Bravo’s documentary ‘Pasarelas Libertadoras‘ the prostitutes working on Caracas’  Libertador Avenue – where the two murders took place – describe a life of violence, from both customers and the state. Yhajaira talks about doing this work since she was 13.

“A shot in the eye by the police left her blind in one eye, she has not recovered from having teeth knocked out by police with a bat, nor has she been cured following dog bites nor have death threats ceased since she witnessed the murder of one of her friends.”

“At this point you have is fear of people,” Yhajaira says at one point in the documentary.”

From an article in Spain’s El Mundo:

“With stitches in her eye and a bruise to try to hide with makeup, one of the stars of ‘Pasarelas Libertadoras’ explains how the police takes them into custody, beat them, humiliates them, robs them, forces them to maintain relationships with them and leaves them lying in marginal areas.”

Last year Transgender Europe (TGEU) reported that according to their findings a transgender person was murdered in a hate crime somewhere in the world every other day. It said:

“That while Brazil has received special attention due to the elevated number of killings, the number of killings in other South and Central American countries … is equally or even more worrying in view of the much smaller population sizes of these countries.”

The Inter-American Commission on Human Rights (IACHR) was told last year by the president of the NGO Diversity and Sexual Equality that a 2008 study of 750 LGBT found that more than half had suffered from societal violence or police abuse. This rose to 83 percent of n cases of transgender people.

It should be noted that – like South Africa – Venezuela has an extremely high murder rate. In Iraq, a country with about the same population as Venezuela, there were 4,644 civilian deaths from violence in 2009, according to Iraq Body Count; in Venezuela that year, the number of murders climbed above 16,000. 118,541 since 1999, according to the Venezuelan Violence Observatory. The murder rate is Caracas is ten times that in Bogotá and fourteen times São Paulo’s.

Venezuelan LGBT activists have been working to improve relations with police. Human rights activist Yonathan Matheus has echoed Johan Leon’s argument that LGBT must complain and work with authorities to get change in the police’s treatment of them.

Matheus describes his experience of police treatment of LGBT as “suffering, death, social exclusion and use of disproportionate force.” He has personally been threatened with death in his HIV prevention work with transgender street prostitutes.

But he says he is ‘explicando lo viejo, para construir lo nuevo’ (explaining the old, to build the new).

Last May the Public Defender’s Office hosted an international seminar on sexual diversity in Caracas in order to promote discussion on ways to eliminate discrimination against LGBT people. The public defender said the event was undertaken as a way to help public defenders develop the methodological and conceptual tools to process complaints by LGBT persons of human rights violations.

Last November the Ministry of Interior and Justice published in the Official Gazette guidelines for the National Police and its officers relating to respect for gender identity and sexual orientation.

Activist Tamara Adrian noted that, in describing the lesbian couple attacked in Porlamar, newspaper reports had demonstrated a positive development in Venuezuelan media coverage of LGBT people [via Google translation]:

“Having read so many refuse to background lesbo-homo-transphobic I note that in this case the newspaper was of equal treatment and respect. The words used: partner, concubine, etc., show an important development highlighted.”

Stop Homophobia Venezuela also noted that the incident had been reported “with seriousness and maturity and not the usual lesbo-homo-transphobic sad tone.”