SAN DIEGO – In what was truly a historic day, Prop. 8 was ruled unconstitutional on Wednesday, Aug. 4. That same evening, San Diegans gathered to celebrate and march on University Avenue in the Hillcrest neighborhood.

Many of the speeches were quite moving. Sanders apologized to the LGBT community for his previous stance on marriage equality; Kevin Kenan executive director of the local ACLU reminded the crowd that the fight must go on; and the Rev. Canon Albert Ogle of St. Paul’s Episcopal Cathedral expressed his belief that one day the religious community at large with apologize to the LGBT community.

The crowd cheered and clapped enthusiastically, but three other speakers also inspired those who managed to get inside the auditorium.

Jaclyn Palmer from Equality California took a moment to share personal news about her father’s grave illness. It was a bittersweet moment for her because she will not have the complete freedom to marry the person she loves while her father is still alive. She expressed hope that no other daughters will have to wonder if their loving parent will get to watch marry the person they love.

“It’s really great to feel proud of my home state and country again,” Palmer said to loud cheers from the crowd. “We really need to remember the work that still lies ahead, I don’t want to burst the bubble, but we need to be sure we fill in our [leadership] with pro-equality people.”

“We also cannot give up our efforts on the ground to build more support for same-sex marriage,” Palmer added. “It may be years before we see Prop. 8 permanently over turned in the Supreme Court and if we can build enough public support in CA on the ground, and I know that we can, we can over turn it for good on the ballot in 2012. We don’t have to wait for the courts.”

Palmer took the opportunity to announce an event on Saturday, Aug. 14, from noon to 5 p.m. where volunteers will go door to door and change more hearts and mind.

“I look forward to continue the work on the road ahead with all of you tomorrow,” she concluded.

Local Human Rights Campaign representative Lisa Martha addressed the crowd briefly. She assured the crowd that HRC would continue to fight for marriage equality as well as for the repeal of the Defense of Marriage Act.

“Today’s decision is support for basic fairness,” Martha said. “We simply all want the dignity and security of having the ability to marry the person we love and today we are one step closer.”

The last speaker, greeted by loud cheers was community activist and national board member for Marriage Equality USA, Fernando Lopez.

“Congratulations love warriors!” Lopez passionately said to loud cheers and claps. “I am from Marriage Equality USA, and we have been here, queer, and fighting for the right to marry since 1996.”

“Today our community stands victorious in the light of love, piercing through their dissipating ‘gathering storm’,” Lopez said mockingly, inducing laughter from the crow. “This is our tipping point, as the years of institutionalized legal barriers begin to crumble and fall under the weight of their own hatred and fear. The process we began here today will begin to resonate across the country and in the pursuit of happiness we will achieve true liberty and justice for all.”

“Tonight we celebrate, soon we will marry, and as we go forward please remember the fight is not over, please join us,” Lopez said as he named numerous organizations. “We are here because of you! and we will go forward because of you!” he yelled.

As the crowd began to disperse many lingered to enjoy more cake and champagne. Pictured below, the cake served by San Diego's LGBT Center. 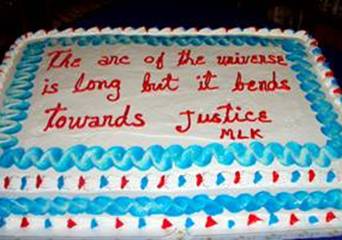 A group men from a rising new organization, Urban Pride San Diego, lingered in the auditorium, and Edward was eager to share his opinion.

“It was great, we basically go by the mantra that there are four words: equality is not negotiable. That is our foundation,” Edward said. “They don’t tax us differently. We are supposed to be one people with equal representation and today’s decision really represents America.”

Three mothers from the local PFLAG chapter joyfully stood nearby. They stated that eight of the San Diego members had rushed home from work to take part in the march and hear the speeches.

“When I heard at work, my co-worker told me,” said Sarah Cohen Richards, co-president of PFLAG. “I was like who do I email first I am so happy! We are proud PFLAG moms! We are thrilled with the Prop. 8 ruling, thrilled for civil rights, and thrilled our kids can get married!”

PFLAG vice president Patty Bowman’s eyes got a bit teary eyed and Richards joke she was about to start crying again.

“I actually cried when I first heard,” Bowman said. “The speeches were great, especially Mayor Sanders, it was great…very emotional day.”

A young male couple, requesting to remain anonymous, was there with one the person’s 7-year-old sister. It was important for them that she be part of the occasion

“We wanted to be married, but the law said we couldn’t,” said one. “Now hopefully we can be.”

Of course the San Diego Sisters of Perpetual Indulgence were on hand enjoying the victory.

“I was in front of my computer when I heard of Prop. 8's overturning,” Sister Shelby Hellbound said. “I then threw on some makeup, a fierce muumuu and met up with Sister Amanda Reckinwith to take to the streets and celebrate with our community. Joy was in the air and it was wonderful to be with our people during such a momentous time.”

“This declaration of unconstitutionality brings a sense of pride that our great society HAS the ability to evolve and I hope that the momentum continues,” added Sister Amanda Reckinwith. “Walking down the streets, festive in freshly hung blue & yellow of equality staggered with rainbows, I was struck by the monumental meaning of our times.This is good! Equality rocks!”

“I think Judge Walker said it best: "Moral disapproval alone is an improper basis on which to deny rights to gay men and lesbians." This is a hard-won and overdue victory for the separation of church and state, and everyone with faith in our Constitution should rejoice,” said Sister Epiphany-Marie Laveau.

Empowering Spirits Foundation (ESF), an organization who works diligently nationwide to change one heart and one mind at a time, had several members on hand to not only help organize the march, but to be part of the historic moment.

“We were all gathered around the news, checking our phones, searching online for Judge Vaughn's ruling. When a colleague of mine received word in San Francisco we all cheered, hugged each other, and I had to call my mother back in Texas who was equally thrilled,” said ESF CEO A. Latham Staples.

“The ruling validates my marriage to Brent, restores equal justice under the law, and sends a signal that the fundamental rights of a few can not be taken away by majority vote,” Staples added. “We must realize though that we still have a long road ahead before the LGBT community is seen as equals. But this ruling just instills in me hope that we may just reach that day sooner rather than later.”

Video footage below courtesy of That's So Gay