SAN DIEGO -- In the world of online gaming, being the next Playstation "game tester" is considered to be a pretty cool job.

Local activist and self-described "gaymer" Matthew Michael Brown hopes to be Playstation’s next tester as he competes in the second season of the reality show aptly called, "The Tester."

While job requirements for "testers" vary from company to company, eHow.com says that in general, video game testers spend hours at a time playing through a video game, testing system settings and looking for glitches in the game or system operation.

Testers are often hired on a contract basis, working for a certain timespan on one game or system. Some video game testers experience periods without work, due to the cycles of game development and releases.

Since Playstation is one of the leading video game developers around, the company is using "The Tester" as an interactive way to engage its fans. The second season, which has already released two episodes, is similar to many other competition-type reality shows.

Over a period of eight episodes, 12 cast members will compete in rigorous challenges, flaunt their creativity and show off their teamwork while vying for the crown … or joystick.

Contestants lived together in what is called a "Playstation Paradise," where the gamers had the ability to play games around pretty much every and any corner in the house.

According to Brown, contestants are not allowed to discuss how many days they were "stuck" in this video game wonderland during the filming process, but he did admit that it was intense.

The initial crop of candidates consisted of 15-18 wanna-be testers who were sent to Los Angeles, with that batch cut down to the 12 that we see in the show and in the after final on-the-spot interviews.

Brown says one episode was filmed per day, with shooting running from 8 or 9 a.m. to sometimes as late as 1 a.m. Once all of the episodes were filmed, contestants went through a couple days of post-interviews once their individual portion of the show was complete (those who want to know how Brown fared in the show will just have to keep watching - so far he has not been eliminated!).

Each episode came with an elimination, complete with American Idol style critiques by the panel of judges after each of the challenges. Brown said that once a contestant was eliminated, they were sent back to a hotel, secluded, and not even given the chance to say a proper goodbye.

"The stakes were high, but it was really fun," said Brown. "Despite the intensity, it felt like a paid vacation in many ways.”

Those who are not into the world of gaming may not find spending a week cooped up in a house, or even a "Playstation Paradise," to be their idea of a vacation, but to Brown, it was like a dream come true.

"I’ve actually been a gamer my whole life," explained Brown, who also joked that “being an overweight, closeted, friendless adolescent will do that to you!”

Brown has been a devoted Playstation/Sony "fanboy" for many years, so he followed "The Tester" during its Season One debut last year.

E3, the Electronic Entertainment Expo, is the annual convention not to be missed by our game-loving friends. Here gamers and others related to the industry come together to learn about latest trends, product developments and news from the industry.

It was at E3 where Sony announced a casting call for the second season of "The Tester." Contestants were to visit a casting web site and submit a video to be considered by judges and the voting public.

"To audition, I made a video of myself holding up a picture of a woman with very large breasts so that people would click to watch,” said Brown. "Once people opened the video, I introduced myself as a gay guy."

While some may be scratching their heads as to why a gay man would use a photo of a big-busted woman to come out as a gay, Brown had a plan. He knew that the sexual female imagery would garner attention and that he got. It was also important to him to be "out" from the beginning.

"I wanted to be out and proud from day one," said Brown. "Apparently, my personality shined through because four interviews later, I was chosen for the show."

The community of gamers who identify as gay, often refer to themselves as "gaymers."

According to gaymer.org, an online community for gaymers, it is important for LGBT gamers to have a safe space to share ideas and meet like-minded others. Ironically, creators of the site say they have often been questioned about the necessity of a "gay gamers" site.

"The truth is, in the gaming community, there are some pretty staunchly homophobic players," says a post on gaymer.org. "Our site is about having fun without the bashing … a safe haven where gaming is the focus, not hate."

Brown says that his being a gay gamer on the show was a landmark opportunity.

"There are practically zero out and proud LGBT figures within the gaming industry," said Brown. "I especially feel that it is my duty to represent my community well, because the demographic of this show falls in line with the teenagers who are bullies or [have been] bullied in school."

According to a report by the Cyberbullying Research Center, forty percent of kids in the United States say that they have been bullied on the internet. Brown indicated that children as young as 7 or 8 are being exposed to and using the hateful language and bullying that exist in video games.

"This is then internalized and many will take the hurtful language, behavior, and words they learn online to school,” Brown explained. "I genuinely believe that video games are a huge component of the homophobic slurs that are being used in schools."

Brown, too, has received many hateful comments from homophobic gamers throughout his gaming and more publicly since the previews of The Tester first became available online.

"This really reminds me of how much discrimination minority gamers face online,” said Brown. “I’ve been the butt of stupid jokes like ‘get off the show fagmer’ to full-on death threats.”

This type of behavior, however, has motivated Brown to work to change the hateful culture that exists within the gaming community. He believes that his appearance on the show is a step in the right direction within the industry and says he has already received some positive private messages thanking him for being "out."

Reality show fans are used to many of the shows having a “token gay” person amongst the cast and Brown recalls the experience to be fairly positive.

"I didn’t really get any outright homophobic onslaughts during filming," Brown recalled. "I did, however, constantly remind some of my fellow gamers that the use of the phrase ‘that’s so gay’ is offensive and hurtful.”

Brown says he re-enforced this message so much that it struck a chord with his fellow cast members.

"Now, whenever we are gaming online and someone uses the term, my fellow cast members will correct the offending gamer without me having to say anything,” said Brown, noting how proud this makes him feel.

Hoping to slip some LGBT activism into the series, Brown made some references to "Don’t Ask, Don’t Tell" during the show’s "Air Force episode." Although the references were cut, Brown hopes he will still have the opportunity to present a powerful message before his time on the show comes to an end. 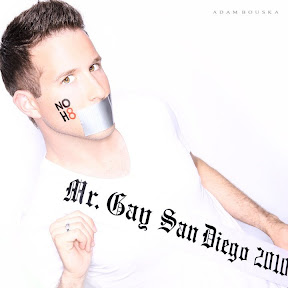 Brown, who currently holds the Mr Gay San Diego title, is also competing in the National Mr. Gay Competition this weekend in Philadelphia. He believes that his appearance on "The Tester" parallels this other competition.

“Mr. Gay seeks to find a gay man who is well-rounded and positively represents the LGBT community as more than a stereotype," Brown explained.

"The Tester offered me a chance to do that, so along with my other activism, I truly believe I have a chance at the title,” said Brown who promises to represent San Diego with Pride at this weekend’s competition.

The Tester, currently in week two of its eight week run, is airing exclusively on the PlayStation Network every Tuesday and will continue until the season finale on December 21.

Those who own a Playstation 3 or PSP can download the gamer-centric reality show right to their gaming console and view from there. Those who do not have a gaming console can watch the episodes, with a one-week delay, on crackle.com and youtube.com.