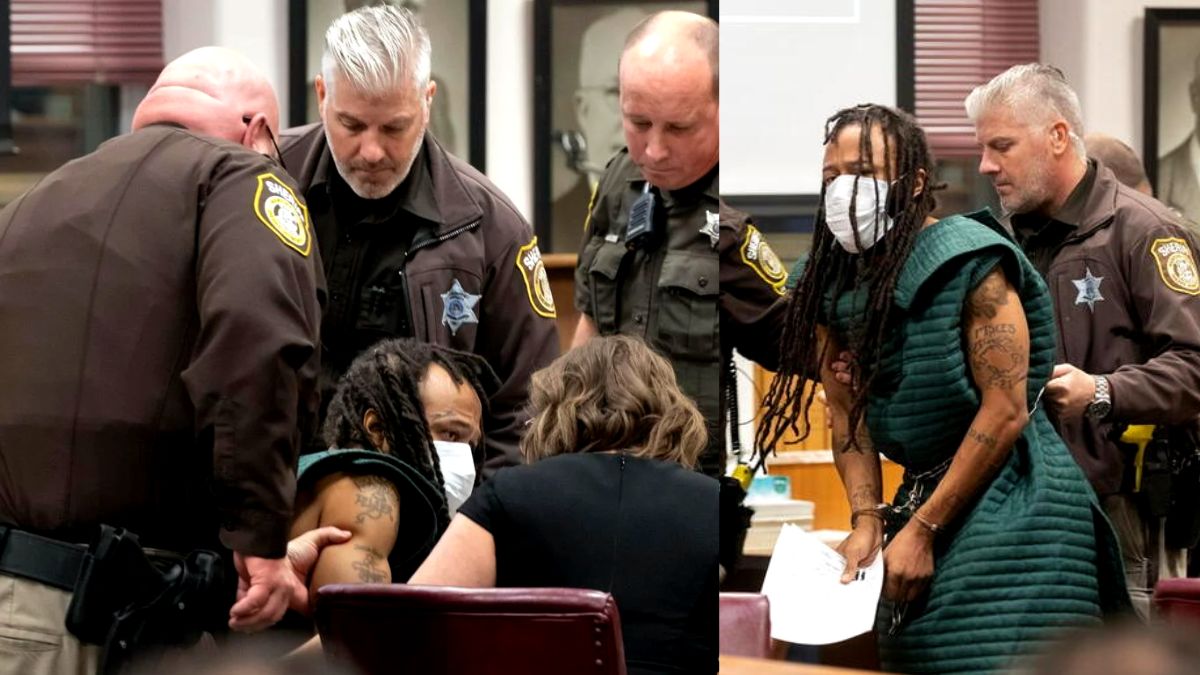 Last year, a guy drove through a Christmas procession close to Milwaukee, a tragic incident that devastated the neighborhood. On the first day of a two-day sentencing hearing on Tuesday, grieving family members of those hurt and murdered met the driver in a confrontation marked by rage and tears. The 40-year-old motorist, Darrell Brooks, is facing a life sentence.

He was convicted guilty on October 26 of 76 felony charges, including six counts of deliberate killing, by a circuit court jury in Waukesha, Wisconsin.

In November last year, Brooks was charged with purposefully ramming his sport utility vehicle through police barriers and into a gathering of onlookers. Around 15 miles west of Milwaukee’s downtown, in Waukesha, people were taking part in the annual parade when they were massacred.

Brooks, Dressed In The Orange Prison Uniform, Meets The Fury Of The Deceased’s Relatives

Tuesday morning saw the start of the sentencing hearing when Brooks was confronted by family members of the deceased and injured who had previously spoken to the court about their loved ones.

Brooks, who was sitting at a courtroom table while donning orange prison garb and a surgical mask over his mouth and nose, is now being held accountable for the results of his conduct. Along with the family of those slain in the tragedy, survivors of the incident and other victims were present to confront Brooks.

Sheri Sparks, whose other son Tucker was hurt in the incident and whose son Jackson, 8, was slain, was one of several who expressed their sorrow to the media. The fact that the catastrophe changed her family for all time is quite upsetting. Any language would fall short of describing the hurt, rage, trauma, and brokenness that people are experiencing.

A Heinous Crime That Mowed Down Indiscriminately

The attack victim who died at the youngest age was Jackson Sparks. The oldest among them was 81 years old. At least 18 youngsters were among the more than 60 people who sustained injuries. In addition, members of a dancing group known as the Dancing Grannies were among the dead. During the hearing, at least 36 people were anticipated to speak.

The Milwaukee Journal Sentinel said that Brooks, a resident of Milwaukee who defended himself throughout the three-week trial, informed the court last month that he anticipated having roughly 20 witnesses testify in his favor.

On Wednesday, when the sentencing hearing ends, Waukesha County Circuit Judge Jennifer Dorow is predicted to give Brooks a minimum mandatory term of imprisonment for every count of killing.

Dorow reprimanded Brooks for not adhering to the court’s rules and arguing with her multiple times throughout the proceedings. As a result, Brooks was repeatedly taken out of the courtroom by the judge, who then had him watch the proceedings from a different room.

Was This Murderous Act Premeditated?

Milwaukee has a long history of homicides, as evidenced by the Jeffrey Dahmer case. The most baffling aspect regarding this new trial is whether Brook had any predetermined desire to kill the people. The 40-year-old first entered a plea of guilty due to a mental illness, but they withdrew that admission in September.

During a trial that featured heated exchanges with the judge, his not mentioning his name, and meandering cross-examinations, he launched an inconsistent defense. Brooks asserted that his car’s throttle was malfunctioning, he had no desire to cause harm to anyone, and he had sounded the horn to alert onlookers.

The Ford Escape SUV was in good functioning shape, according to a car inspection. The prosecution claimed that Brooks had driven into the parade after moving away from his girlfriend following an argument, but they did not specify why. At the time, he was free on bond after being accused of domestic abuse.

When people roll over youngsters while riding through a parade route, their intentions are clear. Sue Opper, the district attorney for Waukesha County, said during closing arguments that it was impossible to call what happened an accident.

Instead, she claimed that his inability to stop demonstrated his intent to kill people. With each conviction for homicide, Brooks is now required to serve a life sentence.