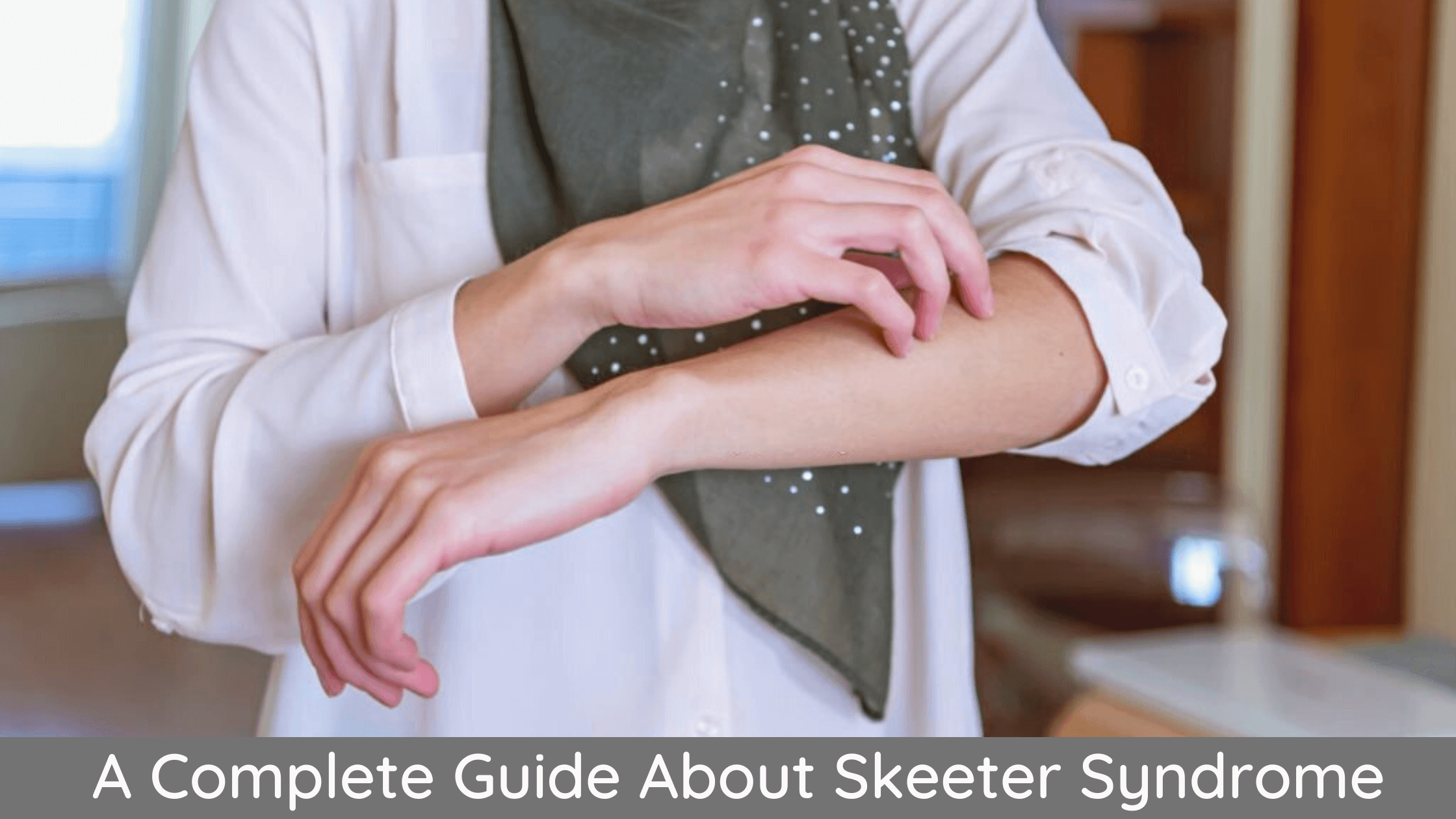 It is not unusual for a mosquito bite to produce a mild allergic reaction on the victim’s skin. This reaction may become more severe within the next twenty-four hours, but it will almost always get better after that and clear up within a week. Skeeter syndrome is a more severe reaction that occurs much less frequently, but it could happen to you.

It is the time of year when many of us spend more time outside, and as a result, we are significantly more likely to be bitten by those annoying mosquitoes that cause itchy bumps. The majority of us, if we can resist the urge to scratch at the bites, will find that the bites eventually fade, the itching subsides on its own, and the bites are nothing more than a minor inconvenience.

On the other hand, some people are susceptible to more severe allergic reactions, which can cause significantly more discomfort and last several days; medical professionals sometimes refer to these types of allergic reactions as “skeeter syndrome.” This is the information you need to know about your condition.

What is Skeeter syndrome?

Skeeter syndrome is diagnosed when a person severely reacts to mosquito bites. At the site of the bite, you might notice a large area of swelling, tenderness, redness, and itching or pain. These symptoms might last for several days. After being bitten, a person may experience this kind of reaction within hours, which may continue for weeks.

You may notice some redness and puffiness within a few minutes of being bitten, followed by a reddish-brown bump that appears for the next two days. In most cases, the bump is very firm and itchy. Occasionally, you might develop a few small blisters or dark spots that give the impression of an injury. For this kind of reaction to occur, you must come into contact with a mosquito for at least six seconds.

It is a significant allergic reaction that occurs locally and is caused by mosquito bites. The symptoms include significant inflammation. If you have it, it means you are allergic to substances found in mosquitoes’ saliva. Some people experience such severe swelling that it makes it difficult to move.

How does Skeeter syndrome Affect Your Body?

People who have skeeter syndrome frequently experience fever in addition to a significant localized allergic reaction. Skeeter syndrome may occasionally be mistaken for cellulitis when the bites are on young children. Healthcare professionals may prescribe antibiotics, but they won’t treat skeeter syndrome. Days after a bite, an infection called cellulitis can develop from scratch.

In Sacramento, California, Joseph Conlon, an American Mosquito Control Association technical consultant, asserts that DEET “remains the gold standard by which all other repellents are rated.” “More than 20,000 different compounds have been empirically tested for more than 25 years, but no other commercially available chemical product has shown the length of protection and broad-spectrum efficiency of DEET.”

Over the years, studies have connected DEET to a few uncommon but severe side effects, such as negative neurological symptoms, convulsions, jerky movements, agitation, aggressive behavior, low blood pressure, and skin irritation. Health professionals claim that Picaridin and oil of lemon eucalyptus are very effective alternatives to DEET that lack many of the purported drawbacks of DEET.

To lessen mosquito bites, the Centers for Disease Control and Prevention (CDCP) advises searching for repellants containing the following ingredients:

Note: The key to outwitting mosquitoes, no matter which repellent you use, is to apply — and reapply — as instructed.

Health experts advise applying DEET completely, avoiding the eyes and nasal mucous membranes, and reapplying as required. “Most apparent repellency failures with DEET are due to misapplications,” he adds. Reapplication is necessary to preserve the DEET vapor barrier above the skin, which deters mosquito bites.

The symptoms of Skeeter syndrome are brought on by a reaction in the body to polypeptides found in the saliva of female mosquitoes. Chains of molecules known as amino acids make up polypeptides. In a severe reaction, it is common to experience pain or itchiness and a large area of swelling, redness, and tenderness.

In addition to this, you might develop a fever. Hives, a type of skin rash, are another symptom that may accompany skeeter syndrome. The swelling may also spread to your lymph nodes, which are part of your immune system. The following are examples of possible symptoms of skeeter syndrome:

Skeeter syndrome is caused by an allergic reaction to the proteins found in mosquitoes’ saliva. When a mosquito bites you, it inserts its long mouthpart called a proboscis into your skin.  The mosquito pierces your skin, which draws blood from you and injects saliva into your circulatory system. An allergy brings on Skeeter syndrome to the polypeptides found in the saliva of mosquitoes that bite.

If you have an allergy to these polypeptides, you may start experiencing symptoms of skeeter syndrome anywhere from eight to ten hours after being bitten by a mosquito. In most cases, patients experience complete recovery within three to ten days. To produce eggs, the female mosquito needs to feed on human blood. To pierce your skin and draw blood from you, mosquitoes use a mouthpart called a proboscis, which is attached to their mouth.

They inject a tiny amount of saliva into your body along with the blood they are sucking because the saliva has an ingredient that prevents the blood from clotting. Male mosquitoes don’t bite humans. Skeeter syndrome is extremely uncommon, but certain groups of people are more likely to be affected by it than others.

The more times you get bitten by a mosquito, the less sensitive you become to the saliva it leaves behind. As a result, severe reactions such as Skeeter syndrome are not very common after multiple mosquito bites.

How to diagnose Skeeter syndrome?

By examining your affected skin area, your primary care physician or another doctor can determine whether or not you have skeeter syndrome. Since no blood test can detect the syndrome, your doctor will usually arrive at a diagnosis after determining whether or not a mosquito has bitten you.

Your healthcare provider will conduct a physical exam and review your medical history before making any recommendations. You might get the following question from them:

When should I see my doctor?

The Skeeter syndrome is uncommon. If you think you might have skeeter syndrome or if the symptoms of your mosquito bites are getting worse, you should make an appointment with your primary care physician. If you want to protect your health and avoid getting bitten by mosquitoes, the best way is to follow the best practices inside and outside.

You should consult a medical professional if you have been bitten by mosquitoes and have a severe reaction. If you notice swelling in your mouth or throat, or if you are having trouble breathing, you should seek immediate medical attention.

How dangerous is Skeeter syndrome?

Skeeter syndrome is associated with developing a localized allergic response in those with the condition. On the other hand, the symptoms will spread across a wider region, the width of which may be anything from a few millimeters to more than ten cm. It is a severe allergic response that occurs locally and is caused by mosquito bites.

Symptoms include inflammation, peeling skin, hives, ulceration, and sometimes fever. As a result of the fact that it is brought on by allergic polypeptides found in mosquito saliva, the condition is not infectious or contagious.

How to treat Skeeter syndrome?

Before making a therapy recommendation, your doctor will want to know what symptoms you are experiencing and how long you have had them. Additionally, they will review your medical history and inquire about any current medications, vitamins, supplements, or other therapies you may receive. Oral antihistamines and topically applied steroid creams are often used to treat Skeeter syndrome.

A family of medications called oral antihistamines is used to treat allergy symptoms. They are ingested by mouth. Topical steroid creams are lotions, ointments, or creams that contain steroids to assist the body combat inflammation. It will help if you put these on your skin close to the illness. Your doctor may sometimes advise using oral steroids.

However, if your healthcare professional believes you have a minor case of skeeter syndrome, they may advise you to:

You could need systemic corticosteroids if your skeeter syndrome is more severe. Injections and tablets are also options for steroids.

The best defense against skeeter syndrome is insect repellant and clothing that covers exposed skin (and any mosquito bites in the first place). Keeping windows closed and being inside during peak mosquito activity helps you avoid getting bitten. Mosquitoes often swarm in large numbers during dawn and dusk, especially around wetlands.

People more prone to skeeter syndrome should follow the same steps to prevent mosquito bites; they need to be more careful. According to medical professionals, those who have allergies and also have asthma, eczema, or other allergies are more vulnerable.

It’s crucial to remember to use it and reapply regularly, even if it may not require a more powerful repellent. Some individuals with skeeter syndrome may take an antihistamine before going outdoors if mosquito contact is inevitable. Avoiding mosquito bites is the most effective method of preventing skeeter syndrome. This implies:

Your healthcare practitioner may recommend that you take epinephrine, which is a medication that comes in an injector that you take with you if you have previously had severe allergic responses.

Skeeter syndrome patients may choose from a variety of treatments. These might be simple DIY solutions or more complex medical treatments.

Start with the most basic therapy method for a bite that only generates a response in a limited body region: ice and elevation. Elevating the region and using an ice pack may help to decrease swelling, ease itching and discomfort, and lessen the redness.

You may have skeeter syndrome if a mosquito bites you and you get acute swelling, discomfort, and itching within hours of the bite.

It would help if you got in touch with your doctor. However, you should seek emergency medical attention if you have breathing difficulties or other, more significant side effects.

By making an effort to prevent being bitten by mosquitoes, you may benefit yourself in the future. Avoid mosquitoes, use insect repellent, and wear protective clothing when possible.

Also, Read – Pelvic Floor Therapy – Everything You Need To Know!

Skeeter syndrome may last anywhere from a few days to a few weeks. When you are sufficiently recovered, you may return to work or school.

See a doctor if you are bitten by a mosquito and have a severe response. Call for immediate assistance if your mouth or throat swells or you have difficulty breathing.

Generally speaking, local allergic responses to mosquito bites become better on their own over time as you get older, have more bites, or have both.

Skeeter syndrome should likely go away in three to ten days.

No. Skeeter syndrome is not contagious and cannot be passed on to others.