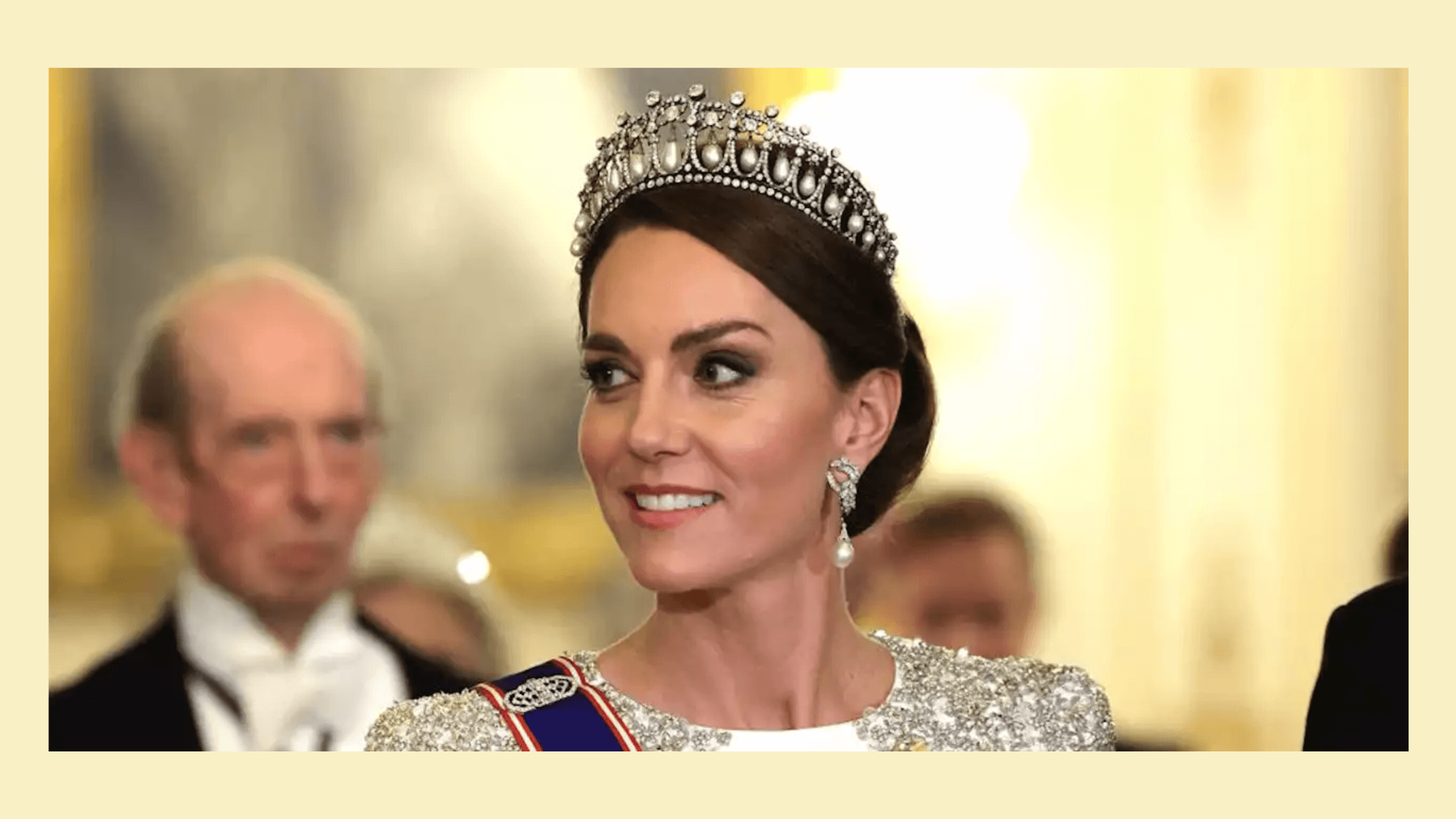 Kate Middleton captured hearts in the ceremonial event on 22 November. She was accompanying her husband, King Carles III on his first State Visit as the monarch in welcoming the president of South Africa at London’s Horse Guards Parade.

The Princess of Wales was in an ultra-regal plum-colored coat dress designed by Emilia Wickstead. In addition to completing the look, she had a matching hat on her head, pointed-toe suede pumps, and some extra special jewelry. In jewelry, she was wearing a set of diamond and pearl drop earrings that her late mother-in-law Princess Diana used to wear, the Three Feathers Brooch, featuring the Prince of Wales feathers emblem.

Kate Middleton Is a Vision in Royal Purple

The Three Feathers Brooch was gifted to Queen Alexandra upon her marriage to King Edward VII in 1863, who was then the Prince of Wales. In appearance, the sparkler is made up of diamonds and rubies with an emerald drop pendant. Previously it was worn by Princess Diana on many occasions until she died in 1997. In the 2000s, Queen Consort Camilla began wearing it.

It is not only this look but her next look also won hearts when she changed into a Jenny Packham white cape gown for the State Banquet following the Ceremonial Welcome Event at Buckingham Palace. The white gown fit her perfectly, giving her an elegant look. The gown had a round neckline and power shoulders with flowing capes extended until the floor. `

With this attire also, she went with her mother-in-law’s belongings, the Lover’s knot Tiara. The tiara has a very magical appearance and is a century old, with 38 teardrop-shaped pearls hung beneath aches. Originally, it was commissioned by Queen Mary in 1913 or 1914 by jeweler Garrard.

According to history, the tiara is the replica of the tiara of Mary’s grandmother, the Duchess of Cambridge, Princess Augusta of Hesse. She matched the tiara with the diamond earrings of Princess Diana and a bracelet from Queen Elizabeth’s jewelry box. And she completed the look with the Royal Family order and the Dame Grand Cross of the Royal Victorian Order star and sash. In her hands, she was seen carrying a white clutch.

Meanwhile, Prince William was in a suit with the Garter Star, the Thistle Star, and three small medals for Queen Elizabeth’s three Jubilees that he was part of in 2002, 2012, and 2022.

In the glamorous banquet, Prince Edward, Sophie, the Duke and Duchess of Gloucester, the Duke of Kent, Countess of Wessex, Lady Susan Hussey, and Queen Elizabeth’s former lady-in-waiting Annabel Whitehead were also present.

The menu for the banquet’s dinner was grilled brill with wild mushrooms and truffles in sorrel sauce and ballotine of Windsor pheasant filled with artichokes, quince compote, and port sauce, and ending up with a dessert, iced vanilla parfait with caramelized apples.

President Ramaphosa was flanked by King Charles and Kate, while South Africa’s Foreign Minister Naledi Pandor sat in the middle of Queen Camilla and Prince William at the table.

King Charles and Queen Camilla were seen inspecting the tables in videos as final touches were made before the arrival of guests.

The tables were adorned with over 100 ivory-colored candles in silver-gilt candelabra, purchased by King George IV in the nineteenth century, displayed with seasonal fruit and 23 flower arrangements. Flowers were from Buckingham Palace and Windsor Castle’s gardens for the floral arrangement.

Every guest was provided with six glasses in addition to a champagne glass for the toasts as over a thousand of glasses were used for the event.

The event was beautifully a success.