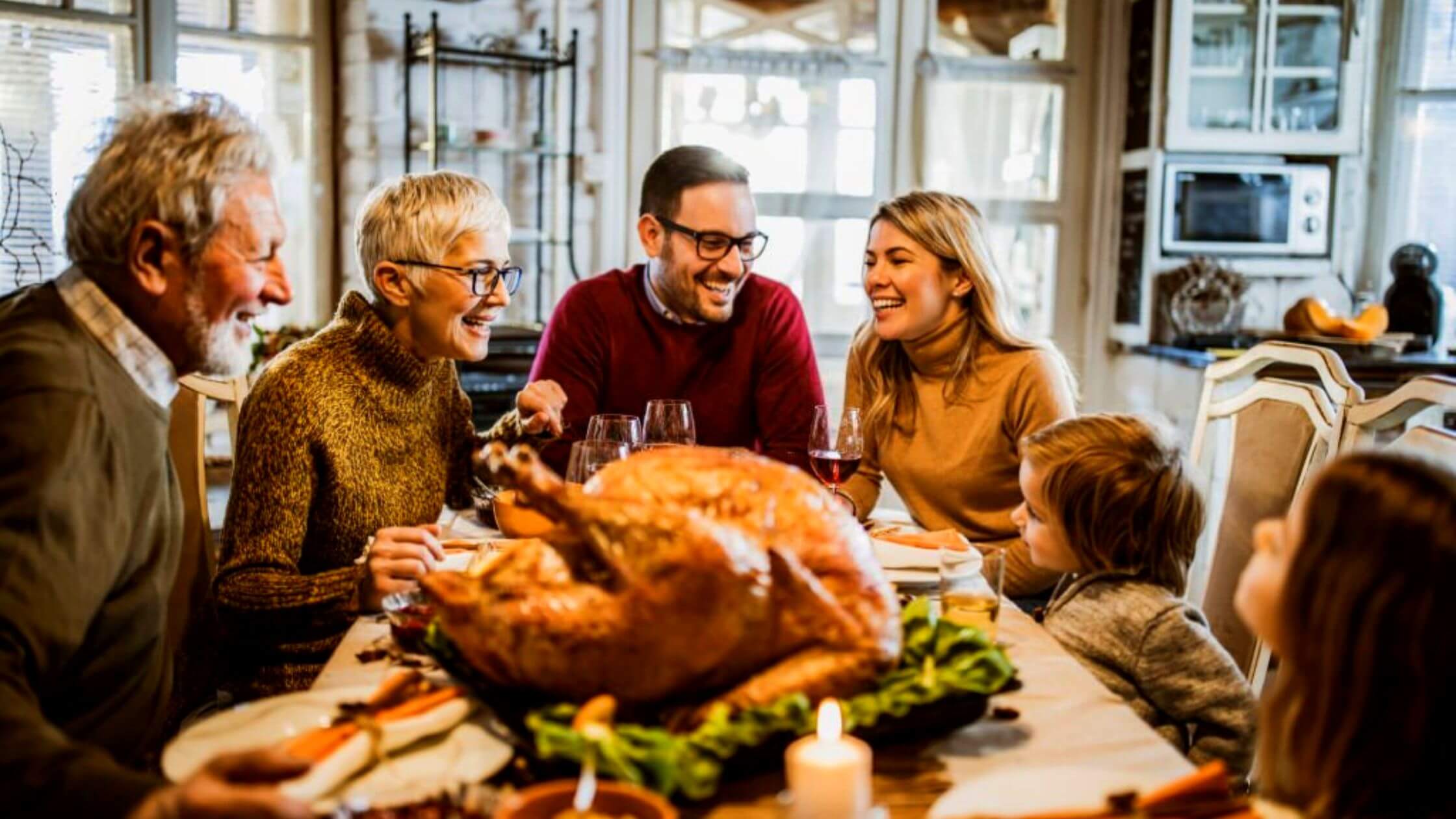 In America, celebrations are already in full swing as people and cities prepare for Thanksgiving! Annual customs and Thanksgiving-related events always seem to go into overdrive during the holiday season.

Thanksgiving is no different from other special occasions in that family gatherings are planned around it. The anticipation of the Thanksgiving turkey, mouthwatering sides, food comas, and football naps are fondly remembered by Americans.

Nevertheless, although this holiday is widely observed in American households, many of us may be perplexed by its mysterious history.

Thanksgiving Day in America was first observed in the 1500s, became mythologized in 1621, and was even observed during the darkest days of the Civil War.

It is now one of the country’s most eagerly awaited and special holidays, observed annually on the fourth Thursday in November. The number of traditions on other nonsectarian holidays may be the highest.

Thanksgiving is a rare festive holiday without a well-established gift-giving component. Family, friends, food, and football have come to represent it. The day encourages all of us to express gratitude for the possessions we already have.

Early in our education, we are taught that Thanksgiving is associated with a feast shared by Pilgrims and Native Americans, along with crafts like the one where we trace our hands to make truly iconic, artistic turkey portraits for enjoyable Celebratory crafts.

Extensive background information regarding this holiday must be more typically covered in lessons or highlighted.

When Be Will Thanksgiving In 2022?

The fourth Thursday in November marks the annual national holiday known as Thanksgiving in the United States.

Thanksgiving can fall any day between November 22 and 28, with November 22 being the earliest possible date.

Fascinatingly, Thanksgiving was moved from the fourth Thursday of November to the third Thursday in November by President Franklin D. Roosevelt in 1938. However, this was certainly not a popular decision.

The timing of Thanksgiving is a little different in Canada, where it is observed on the second Monday in October. It fell on Monday, October 10, 2022.

The Story Of The Beginning Of This Holiday

Thanksgiving is traditionally celebrated to remember the harvest feast the colonial Pilgrims and Wampanoag Indians shared in 1621.

The Wampanoag Indians are thought to have played a significant role in the colonists’ ability to survive during their first year of settlement in 1620. There is disagreement regarding whether or not the meal was initially intended to be shared.

As time passed, it became customary in other New England settlements to set aside feasts specifically for giving thanks on an annual or irregular basis.

According to additional evidence, thanksgiving services were celebrated by Spanish explorers and settlers in what is now Florida and New Mexico in the late 1500s.

As early as 1607, Thanksgiving celebrations were also held in what would become the Commonwealth of Virginia, with Jamestown, the region’s first permanent settlement, hosting one in 1610.

If you are wondering about the first celebrations, you must know that the Plymouth settlers, also known as Pilgrims, didn’t reach the New World until ten years later.

Following their first yield in 1621, they held a three-day celebration at Plymouth. 50 Mayflower passengers and 90 Native Americans were present at the event.

The four adult Pilgrim women who made it through their first cold season in the New World, including their young daughters and other servants, prepared the meal.

As evidenced by documents from the Egyptians, Greeks, and Romans, the concept of “thanksgiving” for the harvest is, of course, as old as time.

Before European settlers arrived on their soil, Native American cultures had a long tradition of giving thanks during harvest feasts. Days of Thanksgiving have been observed by different countries most affected for more than two centuries, long after the Pilgrims.

Why Did The Pilgrims Choose This Location To Reside?

All the pilgrims who escaped from Scrooby, England, went to Leiden, Holland, after being persecuted for leaving the Church of England.

They stayed there for 12 years or more but later had to shift again. It was due to the fear of war, due to the end of the Twelve-Year Truce with Spain. Many shifted to North America. That is why one can still find many Leiden traditions in the modern US, many years down the line.

A large number of people braved the forces and drifted away on the Mayflower on September 6, 1620. On November 21, 1620, the Mayflower stopped at Provincetown, Massachusetts, at the tip of a sloping peninsula which was to be later called Cape Cod.

The Mayflower Compact was written on that day, which happens to be one of the most important historical documents in America to date.

They traveled through the areas surrounding the bay the peninsula had created. The Pilgrims arrived at what is now known as Plymouth Rock on December 22, having conducted the first town meeting in America to choose where to build their homes.

They made their home there, on the sand above the rock. Their successors and the Puritans are still living on four hundred years later.

Thanksgiving In The 18th Century And Afterward

The Continental Congress established one or more Thanksgiving holidays throughout the war, urging the governors of the various states to observe these holidays in their jurisdictions each time.

As a victory parade honoring the American forces’ victory over the British at Saratoga, the President Of the United States, George Washington, the leader of the popular uprising, declared a Thanksgiving holiday in December 1777.

From 1774 to 1789, the Continental-Confederation Congress ruled the United States and served as the country’s legislative body.

It declared several days in which everyone was to pray, be ashamed, and give thanks. The National Day of Prayer and Thanksgiving, now widely observed in America, are the result of this at some point.

Elias Boudinot, a congressman from New Jersey, suggested in 1789 that the House and Senate ask President Washington to declare a day of Thanksgiving in honor of all the countless favors that the Almighty God has shown to humanity.

Washington subsequently established the first Thanksgiving Day as a federal holiday. Part of it stated that the People of the States should recommend and designate Thursday, the 26th day of November, to be deeply committed.

How Did The Holiday Of Thanksgiving Come To Be Observed Annually?

The holiday was yet to be recognized as a federally recognized holiday, even though Thanksgiving became a yearly custom in many communities, celebrated on various days and months that suited them.

In a nation where the separation of church and state is foundational, Thomas Jefferson and many other presidents felt that a public religious display of piety was inappropriate for a government-sponsored holiday.

No more presidential declarations commemorated Thanksgiving until the Civil War in the 1860s, though religious thanksgiving services persisted.

The Mother of Thanksgiving, who also happens to be a writer and editor, deserves our collective gratitude.

Thanks to Sarah Josepha Hale, Thanksgiving is now observed annually as a national holiday. Hale frequently wrote about this already well-liked autumn custom during his time as editor of the publication Godey’s Lady Book.

What Distinctions Does Thanksgiving Make In Canada?

Thanksgiving Day in Canada is observed on the second Monday of the month of October, which is different from the American one.

The English explorer Martin Frobisher celebrated the day in the 1500s, which was the first Thanksgiving celebration of its kind, in what is now Canada. It was a sort of thank you to the lord, for allowing them to navigate safely in the rough waters.

Most of Canada observes Thanksgiving Day as a holiday, but Atlantic Canada has given the citizens a choice, whether or not they want to celebrate the day as a holiday.

All of Quebec, do not observe the holiday. In modern Canada, people frequently travel to celebrate with friends and family. Stuffed turkeys, glazed potatoes, and cranberry sauce are traditional Thanksgiving concoctions, similar to what most Canadians gorge on.

The weather conditions were also quite favorable around that time, with Canadian football live on TV, many Canadians choose to go for a stroll or hike in the woods around that time of the year. There are a lot of revelries around, too.

Why Is Thanksgiving Turkey Such A Big Deal?

With over 90% of Americans consuming the bird on this holiday, a generous feast featuring turkey has become the custom.

Want To know More Interesting Facts About Turkey? : Turkey And Thanksgiving Facts That You Need To Know In A Lifetime!

Though once upon a time, turkey was a delight. Even though they are now much more affordable, turkeys continue to be a festive sign of abundance.

The first meal astronauts Edwin Aldrin and Neil Armstrong had on the moon was a roast turkey wrapped in foil.

She provided a thorough description of a New England Thanksgiving, complete with a description of the roasted turkey set at the head of the table, in her 1827 novel Northwood.

The first tradition that comes to mind when considering Thanksgiving food is sharing a few delectable dishes with family.

Macaroni, stuffing, mashed potatoes, and—most importantly—a magnificently prepared, enormous turkey that is juicy and flavorful! There is room for creativity even though these are the traditional dishes served at a typical Thanksgiving dinner. Some substitute ham, beef, or even salmon for turkey. In contrast, some people might serve a culturally distinct side dish.

In contrast to the rest of the year, dinner is served earlier on this day, which often baffles us. However, convenience is the main factor here.

The mealtime is earlier to accommodate guests traveling from a greater distance. Your stomach can digest a large meal more slowly this way. Additionally, it allows the more athletic group to exercise by playing a family game of basketball, baseball, football, or soccer.

“Parades” are the primary component of the Thanksgiving custom. The well-known Macy’s Thanksgiving Day Parade has been held in New York City every year since 1924. Together with the American Thanksgiving Parade in Detroit, it is the second-oldest Thanksgiving parade.

Since 1952, NBC has broadcast the three-hour parade, which takes place in Manhattan, on a national scale. Radio broadcasts had previously covered it.

Many families start their Thanksgiving celebrations with the parade, which is broadcast from 9 A.M. to 12 P.M. School bands, floats carrying enormous balloons depicting well-known children’s characters, celebrities from the entertainment industry, socialites, and musicians, march in the parade. Broadway actors also participate by singing a well-known song from their currently playing show.

Some families break the turkey’s wishbone as part of their yearly custom. After the meal is finished and the turkey’s meat has been removed from the bone, this takes place.

The wishbone is removed from the turkey’s chest and placed aside to dry. It is found attached to the breast meat. Two people grab either side of the bone, make a wish, and pull until it becomes brittle. Any longer side that is broken off is granted to the breaker!

The families are also invited to the Thanksgiving dinner before everyone sits down to enjoy a hearty meal at home.

They also give back to the community by volunteering at a nearby shelter. It offers a chance for the entire family to participate in a good deed and is a fantastic way to help those less fortunate.

Additionally, pies are a traditional Thanksgiving dish that has been around for a long time, making them a beloved Thanksgiving custom.

It’s impossible to go wrong with pecan, pumpkin, apple, or cherry. Put an apron on and start cooking while the oven is preheated. And sharing it with family enhances the flavor of the pies!